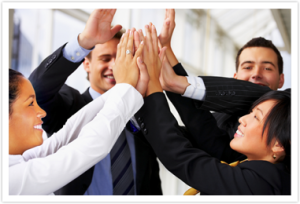 As soon as your people hear the term “team building,” odds are that at least one person in your group can be seen rolling their eyes.  That behavior is almost always followed by the firm assertion that “I don’t do touchy-feely stuff.”

But the truth is thatstrong groups DO reach out and encourage each other with physical touch far more often than their less-successful counterparts.

Saul Miller, author of Why Teams Win, describes in his book an experiment where a community of chimps in a large jungle enclosure.  A psychologist, using a remote device, released a stuffed tiger into the middle of their habitat.

After screaming with surprised agitation for a few moments at the tiger’s appearance, the chimps eventually began to inch toward the stationary stuffed tiger… but the entire time, they were observed reaching out and touching each other during their approach.

According to Miller, the physical “support of other group members bolstered their confidence and courage… as they moved closer to the feared object, they repeatedly touched each other.”

Miller goes on to explain that he has observed similar behavior in successful teams, and writes that “when challenged with threat or pressure, the support of the group gives groups, in all walks of life, the strength and courage to persevere.”

And while your team is likely not a group of chimps, there are other studies that have illustrated the power of physical contact among teammates.

Championship teams ARE touchy-feely, according to research conducted a few years ago in a study titled “Tactile Communication, Cooperation and Performance: An Ethological Study of the NBA.”

The study was conducted and recorded by Michael W. Kraus, Cassy Huang and Dacher Keltner, from the University of California, Berkley.

They reviewed broadcasts of NBA games from the 2008-09 season.

Their research found that good teams all tend to be much more touchy-feely than bad ones are, and that teams whose players reached out with high-fives or other physical contact to touch each other the most often were also more cooperative and cohesive and successful.

Teams that touched each other played better and ended up winning more games.

Obviously, your team of office staff, or faculty of teachers or group of athletes will not be able to succeed without talent… not even NBA teams can “touch their way” to victory.

But it is interesting that the two most “touchy-feely” teams from the study (the Boston Celtics and Los Angeles Lakers) did finish the season with two of the league’s top three records.

According to one of the researchers, the Golden State Warriors were pretty bad that year… and “just watching them and their negative body language… we weren’t seeing any touching at all even in the first quarter. We immediately thought, ‘This is going to work.'”

In their study, the Dallas Mavericks “out-touched” the Heat 250-134 over the first three games of the series, and then went on to win the championship.

So, have you high-fived anyone in your office today?

Maybe you should try it.

People want to get a pat on the back.

People need to feel connected and enjoy a sense of supportive camaraderie.

People work better, and championships are won, when teams are touchy-feely.

So if you want to provide your team a chance to build cohesiveness and learn to support and encourage one another in the midst of adversity, consider the benefits of an Atlanta team building event.

No – your people will not sit in a circle and sing songs while holding hands.

That has nothing to do with team building.

I believe that successful and impactful team building events provide a collection of progressive challenges that test your group’s communication, leadership, and interactions.  Most importantly, those engaging activities are followed by a debriefing session where their experiences are applied to your specific situation so that your team can perform better in the future real-life challenges and adversities they will face.

Your team will be more successful when they learn to support each other… and being touchy-feely is just one way that they can improve their interactions and boost morale.

Can you think of a time when being touchy-feely helped encourage you?