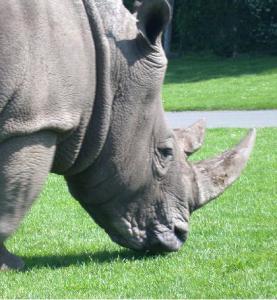 Everyone is aware of the term “herd mentality,” and has likely seen instances where individuals adopt a very different behavior or attitude to crash through distractions as part of a larger group.

Whether it is a herd of buffalo, cattle, antelope, or reindeer, we have heard of how animals congregate and findstrength and comfort in a community of others.

But different animals are known by different names.

A colony of ants.

A pride of lions.

A troop of apes.

A pack of wolves.

A gang of weasels.

A team of horses.

A swarm of wasps.

Each group of animals offers a useful and interesting lesson for leaders in terms of the teamwork that their particular group exhibits. But one of the most important lessons for teams that animal group names offer us is provided by the rhinoceros.

Irwin McManus, in his book The Barbarian Way, talks about rhinos and shares insights about both their surprising limitations and their impressive strengths.

The major problem with their impressive speed, though, is that rhinos can only see 30 feet or so in front of them. Imagine, for a moment, something that huge moving in a group, plowing ahead at nearly thirty miles per hour, with absolutely no idea what is waiting thirty-one feet ahead?

You would assume that they might be too timid to reach full speed, and think that their lack of ability to see further ahead would somehow paralyze them or impact their mobility. But that is not the case. With a powerfully tough horn pointing their way, rhinos charge forward at full steam with no sense of apprehension… and it is that trait that has led to their group name.

Rhinos grouped together and running at full speed are called a “crash.”

Even when loitering about and simply enjoying their surroundings, they are called a “crash of rhinos” because of their dangerous potential.

That is an interesting thought!

And the lesson for team leaders in any field it that I believe that is what we are supposed to be.

When we shake ourselves free of the domestication and civility of cultural expectations and limiting beliefs, our team becomes a “crash” that refuses to be slowed by peripheral or distant distractions.

Charging together toward goal, we become an unstoppable force.

Successful teams may have an idea of the direction or destination they are moving toward, but theirfocus and energy must be placed on the next immediate action that will lead to that success.

Great teammates don’t need to look extremely far into the future to successfully arrive there.

The herd mentality provides an energy and purpose and sense of safety. Who cares that the rhinos only have vision 30 feet ahead? What waits at 31 feet or beyond will be dealt with later. And, if your crash is moving with momentum, many of the people or issues that otherwise would become obstacles will get the heck out of the way!

Creating a herd mentality, and inspiring your team to charge ahead while focused only on the next play or the next step of their project, and not be distracted by other things that are 31 feet or beyond, is a powerful skill.

But that sense of shared purpose and enthusiasm is not easily built, and requires a commitment to team development.

To become a “crash” of rhinos in any field, you must first inspire a sense of shared purpose and identity. This is why teams wear uniforms… to create a feeling of unity.

If your people have not yet adopted a herd mentality, if there is not yet a sense of cohesiveness in contributing their talents to accomplish a common goal, then perhaps you need to invest more time or effort to sell them on a compelling organizational vision.

In large businesses, silos are created amongst people who share similar backgrounds, desires, issues, or values. Your job as a leader is to connect silos and create a unified sense of direction, and then to get your people moving at full speed with focus on the next step.

Great leaders help their teams perform better by their dedication to attack the agenda item directly in front of them – at full speed.

What is the next step that your team needs to crash through?

What issues are 31 feet or more ahead of your team that have possibly been distractions to them building up momentum and becoming a more successful and focused “crash?”

Are you aware of other insights that rhino behavior offers leaders?

Share your thoughts below, or take a moment to follow Sean on twitter and/or connect with Sean on Linkedin to continue the conversation and receive future teamwork and leadership resources to lead your team!