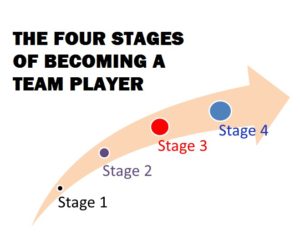 Becoming a Team Player is not always an easy or quick transformation. It often requires a significant personal paradigm shift for an individual to move up through the four stages.

Our culture has not always emphasized the value of teamwork.  Heroes such as Clint Eastwood, John Wayne, and even James Bond seem to be icons of rugged individuality and independence.

But the truth is that we cannot all be experts in every field, and accomplishing a significant goal often requires interacting with and depending upon others and their resources or talents.  It takes many leaders far too long to recognize that teamwork is not a sign of weakness – it is evidence of WISDOM.

Teamwork is defined as the coordinated activities of a cohesive group who contribute diverse skills and resources to accomplish a compelling common goal.  But it takes some people longer than others to recognize the value in teamwork and achieve a comfort level with successful team behaviors.

If you are unsure where you (or a co-worker) may currently be found in the four stages of becoming a team player, I have listed and described each stage below.  Basically, where someone is located on the “team behavior spectrum of stages” is determined by what it is they want from their teammates…

Stage one of the four stages is usually the default behavior of leaders or high achievers.  This stage is characterized by an individual who, because of pride and ego, insists on doing everything alone – and convinces him/herself that if he/she did not do it, it would not get done the right way.  People in this stage want to be recognized for their efforts and enjoy the attention that comes with achievement, but often find that their individual celebrations are less fulfilling than shared success.

This stage of becoming a team player is a huge first step, as it is marked by a leader’s decision to seek the wisdom of others.  It often comes after the person has experienced some success, but has also become frustrated with having to “figure it all out” alone, when progress could be made more quickly and surely by finding someone who has knowledge or skills that would make their project much easier.

The third stage is reached when someone recognizes the need to lean on others instead of doing it all by him/herself.  Asking for assistance is not quite a true culture of teamwork, but it is only one step away, as it involves looking elsewhere for resources or skills that can contribute to accomplishing a task. It is cooperation, and one small step away from reaching the top of the team collaboration ladder.

The last and most productive of the four stages of becoming a team player is reached when someone actively looks to establish an alliance with others to accomplish a worthwhile goal.  An alliance is a bond – a partnering that produces a situation where individual success is based upon group success… It not only offers the benefit of others’ talents and perspectives, but it also provides each member of the team a supportive network of people to collaborate and later celebrate with.

One of those four stages of becoming a team player likely describes you and all of your teammates.  And it may seem odd, but often – depending upon the trust that has been developed on the team they are part of – people can actually find themselves at different stages on different teams.

The more comfortable a person is with the people they work together with – the more willing they often become to move up the list to the next stage of teamwork behavior.

If there are too many people on your team who seem to be stuck in one of the early stages, I encourage you to consider the impact that a fun full or half-day business team building program could have on your organization.

Just a few hours of working through a few customized challenging activities can improve awareness and communication skills and become the catalyst you need to move your organization forward with the teamwork you desire.

And I would be honored if you chose to follow Sean on twitter or to connect with Sean on Facebook to get additional information and teamwork resources!

This article can also be found in SOLD Sales Executives Magazine –

…visit their site for useful information to lead your team!