(Thanks to Dave Blum for sharing this guest article)

A few days back I watched a fascinating movie, called The Way.  Have you seen it?

One of my go-to online resources, the Internet Movie Database (IMDb.com), describes the film’s plot as follows: 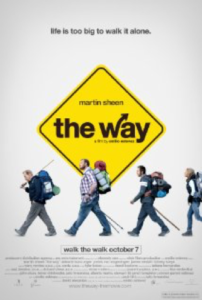 “A father heads overseas to recover the body of his estranged son who died while traveling the “El Camino de Santiago,” and decides to take the pilgrimage himself.”

Although the description makes the story sound dry and depressing, the movie is anything but.  Taken as a travel log alone, The Way is a wonderfully entertaining story.

While walking the 400-mile path to Spain’s famous pilgrimage center, Santiago de Compostela, the grieving father, Tom (Martin Sheen) encounters all manner of lovely scenery and awe-inspiring, historical, Iberian locales.  What interested me most about the movie, however, is not the just the father’s physical odyssey but his emotional journey as well.

At the beginning of his trek, Tom is self-contained in his bereavement, determined to scatter his son’s ashes along the trail while shunning as much contact with his fellow pilgrims as possible.  Nevertheless, as all travelers know, it’s mightily difficult to avoid all human contact when on the road.

By hook or by crook, Tom picks up a coterie of colorful companions along the way, including:

Like Tom, each traveler possesses a “professed” goal and a deeper, inner hurt motivating his/her actions.  Yoost, for example, binges on food and drugs as a way of forgetting that his wife has left him over his burgeoning size.   Similarly, Jack drinks to excess to push away thoughts of his stubborn writer’s block and floundering career.  Sarah the smoker walks more to forget a failed marriage and a terminated pregnancy than to give up cigarettes.

And of course there’s Tom, following the Camino both to honor his son as well as to overcome the suspicion that his coldness may have pushed his son away (and led to his death).

The beauty of The Way is the manner in which the four characters’ pilgrimage allows each one to work out their emotional issues within the unexpected embrace of an unlikely family of fellow travelers.

So, too, in business do unexpected families arise, in the most unlikely of situations.

By “going into the trenches” together, working as a team against difficult odds and the roughest deadlines, we often bond with other people in the most remarkable ways.

The key is always about developing trust.

Are you willing to open up to your teammates and let them in on your struggles under the surface?

Can you be there for your family and fellow travelers – physically and emotionally – when they need you the most?

In The Way, for example, Tom finally lets down his guard when his companions — in spite of Tom’s coldness – bail him out of jail.   As a general rule, trust arises in direct proportion to the amount of vulnerability you’re willing to show with your teammates.

If you haven’t seen The Way, I recommend you give it a shot. It’s a good one!

Rest assured that I’m not going to tell you if Tom and caravan reach the end of their pilgrimage.  You’ll have to find that out for yourself.

The key to great team leadership is appreciating and developing those relationships.  The best leaders know that, in the end, destinations are rarely as interesting as the journey getting there.

Founder and President of Dr. Clue Treasure Hunts, the world’s largest team-building treasure hunt company, Dave Blum earned a B.A. in English from Pomona College in Claremont, California, a professional coaching certification from IPEC, and is continuing member of the North American Simulation & Gaming Association . After a three-year stint teaching English in Japan for the Mombusho English Fellows program, Dave worked in tourism and the non-profit sector before discovering his destiny as a treasure hunt master, team-building trainer, writer, speaker and entrepreneur.

2 thoughts on ““The Way” to Build Team Trust”