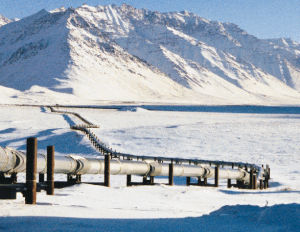 Next time you see them, tell them this story about the Trans-Alaskan Oil Pipeline…

Oil was discovered on the northern slope of Alaska in 1968.

After the 1973 American oil crisis, and a few legal battles with environmentalists, oil companies started planning the pipeline’s construction.

The first section of four-foot-wide pipe was laid in the spring of 1975.

By 1977 all 800 miles of pipeline had been welded together at a cost of over $8 billion dollars.

About 6,000 of the workers during the pipeline’s construction were Alaskan natives.

But building the Trans-Alaska Pipeline System required over 60,000 workers, and many people made the trip up to Alaska because the oil companies promised high-paying jobs at a time when most of the United States was in a recession.

While congressmen made about 42,000 a year, unionized pipeline workers could earn about 1,000 dollars a week.

Another incentive may have been a common joke that in northern Alaska, “there is a woman behind every tree.” See, most of Alaska is so far north that there are no trees at all.

Women only made up about 5% of the pipeline employees.

All of the workers were unionized, and many of them traveled up from Texas.

They soon found themselves working in brutally cold conditions.

The Texans were mostly unskilled laborers.  They made their money digging trenches in areas the heavy equipment couldn’t reach, spreading gravel, or doing other odd jobs.

And the weather was ridiculous.

Workers had to go out in special gear to endure temperatures that often dropped below negative 60 degrees.

Most of the Texans could only stand to work a few hours and then would take a break from the frigid weather – but the Eskimos, the native Alaskans, were different.  They would work their full eight hour shift out in the cold without a problem.

The difference in the native’s productivity was so significant that, eventually, the oil companies became curious to learn what made the natives so much better as workers.

They decided to conduct a study to find out why the Eskimos could withstand the weather so much better than the Texans.  But their research found no differences in the gear they used.

There weren’t any significant physical differences between the Eskimos and Texans either.

There was nothing in skin thickness, blood, or anything else physically that could explain the differences in the ability to withstand the temperatures.

The answer finally came when they did a psychological study.

In individual interviews, the Eskimos ALL said they knew it was going to be cold, but there was a job that had to be done.  They chose to focus on the WORK instead of the WEATHER.

The Texans they interviewed were bothered by, and focused on, the conditions – the temperature kept them from focusing on their task.

Athletes do this, too, sometimes.

But if a player is complaining about the referees and their bad calls, then that player is probably too busy whining to do any winning.

Our attention should ALWAYS be on the job we have instead of the things we can’t control.

There will always be adversity, or bad refs, or rough weather.  It is a leader’s job to ignore those distractions and get the job done.

Bill Parcells is famous for sharing a similar message with his football teams.

He said, “Don’t tell me about the pain, just show me the baby!”

Now, being a father of four kids, I can tell you that I didn’t complain about the pain at all.

But Parcells’ point is that we need to focus on the pipeline.  And we all have a pipeline – a project – that we are working on.  What is YOUR pipeline?

Has your team been distracted by uncomfortable conditions?

Maybe your group could benefit from a custom team training workshop or a fun day of leadership development of corporate or teacher team building.

But, when you know what needs to get done, don’t be like those Texans in Alaska.

Don’t waste energy complaining or whining or focusing on distractions.

Focus on the job that needs to get done.

If you have questions about team building, take a look at Sean’s FAQ page.