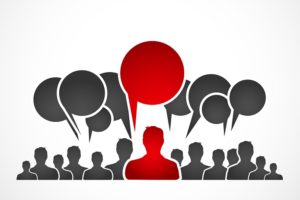 Communication is a tool that must be used and maintained throughout our lives.

If not, then we become the manager who never gets the most out of his employees, the coach who fails to inspire his program with a motivating vision, or the owner who sees consistently high turnover in his company.

What am I talking about? Well, to use a sports experience that exemplifies a bigger issue, I went to watch my daughter’s club volleyball team play a few weekends ago at the Georgia World Congress Center. This tournament showcases virtually every age group, from 10 year olds to high school seniors. Players come from all over the southeast to compete in the tournament’s different divisions.

Over the three days of competition, I noticed a surprisingly wide array of communication styles and motivational coaching comments.

I found myself conducting a very unscientific study of how many points were lost each game simply because there wasn’t enough use of communication by the players on the court.

The answer was an average of around 4-5 points per game (they play to 25, and must win two out of three games).

In the world of volleyball, that’s the difference between Championship and finishing somewhere in the middle of the standings. It’s the difference between your company being an industry leader or barely making payroll! If those players had been better trained in the skill of communicating and using specific words or phrases, they would not have lost those 4-5 points per game.

Every organization should have its own set of key words or phrases specific to their culture.

For basketball teams, it may be “blitz” to trap a ball screen or “bump” for defenders to switch the screen.  For these volleyball players, it would have been as easy as getting them to consistently call out “mine” to call other players off of call out “you” to let someone else know it is their play, or call out “over” to make sure the hitter knew they needed to send the ball back safely over the net.

For Disney, their employees are called “cast members” to emphasize the role of entertaining guests– but your team of people should have a group of words or phrases to expedite understanding and productivity that are original and unique to your culture.   But, if communication is that simple, then why is it that at every court I observed during that volleyball tournament the coaches were complaining to their players that they needed to talk more?

Well, although it is likely the most overused and trite saying in all sports, it is equally true in any organization.  Talking – communication efficiently – is the key to quick and sustained success…

Unfortunately, most people, whether in athletics or businesses, don’t truly buy into the fact that communication is a skill that should be focused on like passing or setting or serving. My daughter’s team may be willing to work on timing their hitting approach for hours, but on the basics of situational communication, almost never.

As we become more experienced, we learn how communicating well gives us the best chance at winning. I have said many times that “the team that plays the loudest usually wins.”  But if you want your players or staff to utilize the skills of efficient communication, you must train them like you do any other workplace skills.

Here’s the nice part…it can be done in conjunction with the other skills, not in addition to them. For example, in a passing drill, the pass doesn’t count unless the player calls “mine” before it crosses the net. Or, for a defensive drill, the screener’s man must call either “blitz” or “bump” and the teammate must respond by repeating it loudly in order to get out of the drill.

When you schedule a custom team training workshop or professional development, what are the take-aways that you want your people to be able to use?

It is likely something that can be verbalized and remembered by using a phrase or term that helps anchor the intended information to a desired behavior.

The simple point is that we should stop demanding in the heat of competition something that we were not willing to train our people to do.

Businesses have suffered due to poor communication. But communication is a learned skill that everyone is capable of… and while some master it, most do not.

Remember that your people will always do well what you ask them to do often!

Take the time to learn and to teach communication, instead of just demanding it.