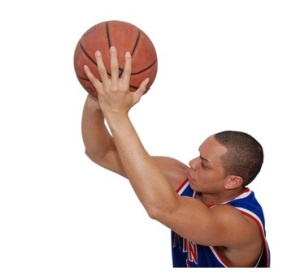 Let’s discuss how to fix your flying elbow and change bad habits to good ones.

A leader’s job is to help fix fundamental flaws in those you lead, to provide a vision of what you are working to accomplish together, and to establish roles and expectations of daily efforts that will eventually lead to the destination you have identified as your team’s intended goal.

As a coach, I was constantly correcting and working to improve the fundamental flaws of my athletes, and there is one example in particular that I often think of when I begin to work with a team or organization about changing unproductive habits.

One of my favorite players from my 18 years of working with teams handled the ball well and played guard for us – on offense, he was quick enough to get by most any defender – but his main weakness was that, when shooting free throws – or when teams would sag and deny his penetrating drives to the basket – he struggled to make his shot consistently.

As coachable and hard-working as he was, he struggled to tuck his elbow in underneath the ball, and no matter how many times I showed him what proper form is it seemed like his elbow would still pop out!

Shooters should keep elbow under the ball, and finish up with backspin – Your elbow is a pointer and legs are your power… but his habit was to bring the ball to his stomach in his pre-shot motion, and that created what we call a “flying elbow,” one of the more common and difficult problems in shooting form for young athletes.

Because of this, his outside shots and free throws were inconsistent and usually missed to the right- which is where his “flying elbow” pointed to, and the mechanics of his arm obviously encouraged the ball to go… off the rim and to the right.

We spent a lot of time in the summer and off-season skill sessions working on correcting that flaw in his shooting technique – repetition is the key to learning anything, and you do well what you do often!

The problem was that – as many times as we worked on him finishing shots with his elbow in (and there were thousands of shots and hours in the gym spent working on it) – he still struggled in our scrimmage and game situations to apply the techniques we had talked about… and he reverted back to his bad habit – the flying elbow!

So the summer ended, and school began again in August.

Sometime that fall – just before we were supposed to begin pre-season workouts – I arrived at home one afternoon and found my daughter had made a pitcher of lemonade. But by the time I got home, it was empty…

As a joke, to be funny, I picked up the pitcher and pretended to pour it into a cup.

“It’s not coming out! I can’t get the air to pour out into my cup! Guess somebody needs to fill it back up with some lemonade so I can fill this cup!”

And right then I realized how to fix his shot –

You see, you can’t get rid of the air in a pitcher without replacing it with something (like more lemonade made later than afternoon). The same is true for habits – it’s tough to stop a bad habit without replacing the behavior that leads up to it.

So I figured out that instead of focusing on the way he finished his shots, we needed to go back and replace his pre-shot motion…

Instead of letting him continue to bring the ball into his belly, or hold it on his belt buckle, we had him keep the ball outside his body – and this made it easier for him to finish the way he needed to and get rid of his flying elbow…

So how does this apply to you?

Well, we all have a flying elbow in our lives.

We all have a habit or a hang-up that keeps us from selling more, or teaching effectively, or building better relationships.

The key is to first know that success is more difficult than just stopping a bad habit.

Maybe you want to quit smoking, or maybe your flying elbow is unhealthy eating habits.

If there is a flying elbow issue in your organization, consider the benefits of a custom team training workshop to dig deeper and correct it.

Whatever it is you need to correct – look for the circumstances or behaviors that lead to that bad habit, and then replace that behavior with something that will more easily lead to the habit you want repeated. Give your people the time and opportunity to address the behaviors that need to be acknowledged and corrected…

Get rid of the stuff that leads to your flying elbow, and the results you want will follow!