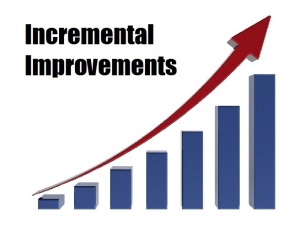 If you are interested in truly lasting team success, you will want to focus on incremental improvements over time instead of overwhelming and immediate change.

Consider when you are driving.  If you are moving in the wrong direction, or miss a turn, you won’t turn 180 degrees at full speed – that would result in a terrible crash.

Instead of wrecking your team with overwhelming 180 degree changes, a smart teams and  wise leaders will implement incremental improvements – and seek to change one degree at a time over a longer and more comfortable period.

Here is a terrific story that illustrates the idea:

They decided to try a new helicopter pilot to take them to a remote area in Alaska where they could spend a week out in nature ant hopefully find a few moose.

A week later, the helicopter pilot arrived to the landing site and found the men standing proudly, waiting on him with three huge moose to take back as their trophies from the yearly hunt.

The pilot knew the moose would be heavy, and he explained this concerns to the hunters.

With you two and myself, I don’t think we’ll be able to make it back carrying all three moose.  They are going to be too heavy.  You’ll need to leave at least one of them behind.”

One of the hunters shook his head in dissent.

“Mister, last year, our pilot got us, our gear, and three big moose in his helicopter, and we don’t plan on leaving here without all three this year.”

The young pilot wasn’t sure how it could be possible to get all that weight on the helicopter safely, but he shrugged his shoulders and did his best to strap all three of the moose on the helicopter and they took off.

The helicopter struggled with such a heavy load, and they hadn’t gotten far before it scraped the tops of some trees and eventually crashed.

A few minutes later, when one of the hunters gained consciousness again, he shook his buddy awake.

The second hunter was bruised from the crash, and still pretty shaken up, but looked around and then replied with confidence.

“Wow – looks like about 150 yards further than last year!”

Incremental improvement is what smart teams focus on!

The truth is that big changes are scary and difficult to sustain.

They are unwieldy and uncomfortable and unlikely to succeed because few people are ready or willing to make big changes, no matter what team you are leading.

Instead of scrapping what has been done previously, find something that can be tweaked that will start moving your organization in the direction you desire.  If your family or organization needs to change, I suggest you begin by working on incremental improvements.

Incremental improvements allow you to keep your people comfortable and make only slight adjustments, which are far easier to sustain – and change is only successful if it is maintained.

It is the same philosophy that has helped people stop smoking, by lighting just one fewer cigarette each day.

It is the same philosophy that has helped people save hundreds of dollars a year by buying just one fewer Starbucks drinks each week,

It is the same philosophy that has helped people gain muscle or endurance by doing just one more push-up or running one more lap each time they workout or go running.

But like a diet, change is only successful if you can maintain it – otherwise, it only leads to wasted effort, anxiety, and frustration.

But when small sustained adjustments yield positive results, your people will have something to celebrate and be proud of… and they will be more willing to adapt to the next minor change.

And those incremental improvements eventually add up to significant and noticeable success!

If your team is looking for a catalyst event to supercharge morale and build cohesiveness as part of your next organizational change initiative, consider calling a team building speaker who can deliver fun with a purpose!

Experiential activities offer loads of Ha-Ha’s that lead to powerful A-Ha moments that your team be able to apply immediately to improve productivity and start making the incremental improvements that will lead to the results you want!