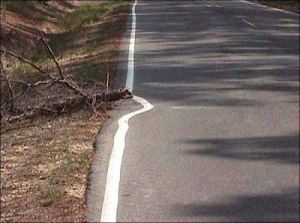 One very dangerous catch phrase that people on great teams would likely never speak is “that’s not my job.”

Unfortunately, it is a phrase that has crept into many organizations, creating conflicts amongst teammates that should be supporting one another.

As a basketball coach, I used to look for athletes who did the little extra things that didn’t show up on our statistics sheet.

I loved to catch a player picking up a piece of trash from the locker room floor.

I would stop practice to celebrate and applaud players who set a good screen or blocked out their man, even when it didn’t result in a basket or a rebound – because I realized it was importnat.

It is those often unrecognized efforts that are the backbone of a successful team.

In the picture above to the left, you see the result of what happens when people think “that’s not my job.”

Instead of picking up or moving the tree branch, someone just did what they felt was within the scope of their job description – and we ALL end up worse off because of it… Great teams are made of people who take ownership for the organization’s success instead of focusing only on their job as defined by some manual.

Not too long ago, there was a news story about a group of volunteer firemen in the western part of Tennessee who stood by and watched a family’s house burn to the ground, and did nothing.

They were there almost immediately.

They had the gear and tools and training to take action.

But their supervisor refused to allow them to put out the fire, because the homeowner had not paid the annual $75 required fee for fire protection.

Apparently, this is something used in many rural communities to keep their volunteer fire departments going.  The only reason the firefighters were there at all, according to the chief, was to keep the fire from spreading to the house of a neighbor who had paid his $75 fee.

This transforms workplaces into disconnected and vengeful battlegrounds that, instead of working together, often work in opposition to other departments or people because they are too focused on doing their job to realize that their job is to see and contribute to the bigger picture!

According to the fire chief, if his crew helped homeowners who refused to pay the required annual fee, then nobody would pay for the services.  But that sounds like lessons taught to businesses that refused to pay organized crime for “protection.”

In most any corporate or educational setting today, the paradigm of having a specific unique group that only handles specific issues such as procurement, or shipping and receiving, or production, or marketing, is fading.  Leaders are finding that an understanding of, and participation in, various parts of an organization makes more and more sense, as it illustrates that all roles play a small part in the bigger picture.

Apple has excelled at getting this right – and has become very wealthy as a result of their collaboration and teamwork.

(You can find great jobs on jooble.)

Many of you may recall the sitcom “Chico and The Man.”

In the show’s first season, Freddie Prinze (Chico) often said, “That’s not my job” – and it became somewhat of a catchphrase. He had used the same phrase for years in his stand up comedy act.

When some viewers contacted him and suggested the phrase was reinforcing stereotypes about Hispanics being lazy, Freddie apparently listened.   He changed his catchphrase to “Looking Good!” –  and it soon caught on with the public as well!

It isn’t just Chico who can benefit from changing his catchphrase.

If you have heard (or said) “that’s not my job” at any point in your recent past, let me encourage you to consider replacing that dangerous phrase with a far more positive and productive one.

In the future, you should start saying (to yourself and to others) “How can I help?”

By taking initiative and offering to assist your teammates, you build trust, relationships, and goodwill across the departmental or other lines of your organization – and you become more aware of how teamwork can improve your work environment.

Don’t continue to participate in the well-known tragic comedy of SOMEBODY, EVERYBODY, ANYBODY, AND NOBODY.

Give people a positive example to emulate.

Change YOUR catch phrase to “How can I help?”

Your example will have an immediate impact on your own outlook and activities – and will influence other teammates to reconsider their catch phrases and behaviors as well.

If you are part of a group that needs a boost of morale, cohesiveness, communication, and leadership skills, I hope you will consider the benefits of a full or half day of business team building event.