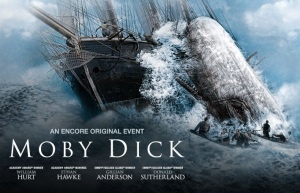 There is a saying that you are one of three things:

That brief analogy can convict the least involved among us with its truth and simplicity.  It is likely that you have, at times, played each of the three roles.

But it is tremendously important to acknowledge what role you play on your current team, and what role your teammates are playing, to better accomplish the goal you have identified.

Nowhere in literature is the difference in personalities more clear and significant than in Melville’s classic fish story, Moby Dick.  In the novel, each of the characters brings a very different perspective and motivation to the quest to hunt down the white whale.

Whatever white whale your team is chasing, you will undoubtedly have a far more enjoyable and successful journey together if you and your teammates invest time in acknowledging the personality and motivation of each member of your crew.

As an example, simply consider the character from Melville’s novel:

1. Ishmael: Our narrator is unsure and without a driving purpose in life– he is the everyman character who wants to join someone else’s adventure and simply tags along to see what might happen.  Ishmael says, in the novels first few pages, that “For my part, I abominate all honourable respectable toils, trials, and tribulations of every kind whatsoever.”  His role in the action of the novel is nearly inconsequential – he is by his own account there as a spectator.

2. The Crew: Queequeg is the skilled harpooner who brings his very impressive talents on board but is withdrawn, different, and distant from his crewmates. Together with Stubb, an easygoing but competent jokester, and Starbuck, a thoughtful and serious voice of reason (and coffee shop celebrity), they make up some of the crew that does the work that Ahab’s passionate quest requires and that Ishmael dutifully observes and records.

3. Ahab: The Captain is driven and uncompromising in his passionate pursuit of a goal – his search for the white whale that injured him years before and now eludes him.  Ahab is consumed with this one pursuit, and claims in one of his powerful monologues that “Ye cannot swerve me, else ye swerve yourselves! The path to my fixed purpose is laid with iron rails, whereon my soul is grooved to run. Unerringly I rush! Naught’s an obstacle to the iron way!”  He is unapologetic and forceful in claiming that no obstacle will stand in the way of him finding his goal.  It is his passion that is a beacon to the crew, and even Ishmael, for like moths to a fire they crave the energy and excitement of a man who has committed himself to something.

We all strive to be a part of something significant, and finding your role on a team that has identified a challenging and unifying goal can be exhilarating.

Even after you identifying your position in the parade you are currently a part of, perhaps even more important is recognizing how your personality type, and that of your team members, could best contribute to your team goal.

The study of team personality types is something that you can benefit from, and there are a number of useful tools available for determining the personalities on your team.

For years companies have employed the DISC inventory (invented by John Geier) to identify their people as dominant, influential, steady, or compliant.  These have since been modified into other more easily understood team personality type inventories, such as Personality Shapes (by Susan Dellinger) where you are identified as a square, circle, triangle, or squiggle.

Another such profile, created by Dr. Gary Smalley, classifies individuals as a lion, beaver, golden retriever, or otter.  Each animal is an easily recognized by the traits they represent.

With this information, rather than losing your ship, as Ahab did, in a final irrational maelstrom of emotion, you can instead use the awareness of your own and other team personality types to assign roles and communicate in a more effective way.

If you are ready to lead your parade, or are interested in identifying the animal personality types on your team to foster better communication, self-awareness, and role acceptance, then a day of teambuilding activities along with a breakout workshop might be a great idea!

When you look around the ship you are on, can you identify which of your crew are more interested in being friendly supporters instead of thoughtful perfectionists or easily distracted creative types?  As a leader, you need to know the team personality types you are working with to best use their strengths – and as a part of the team, understanding your peers and your superiors makes communicating and working together far more productive.

The best teams have an understanding of each other and use that knowledge to perform at a higher level than those who experience conflicts because of their differences.

The best leaders are willing to watch the parade at times and encourage others to experience the feeling and perspective of leading – and with a better appreciation of your team personality types, you can be more effective in motivating them to do so.

Consider the benefits of a business team building event or team personality types breakout workshop – and you may be surprised at the Great Results you will enjoy!