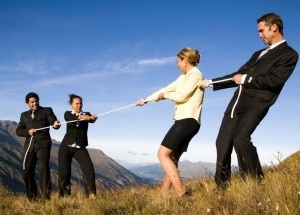 Teamwork begins with a shared commitment to a defined goal.

In most cases, whether it is a championship in your sport, test scores in your educational field, or industry leadership position in your business niche, there is someone that your team will need to out-perform in order to achieve the goal you have set.

It is not your job to please everyone. Sometimes you must remind yourself that, instead of being a villain to your competition, you are just a hero in the story of another team…

The hero of one team is another team’s villain… so, heroes will often have enemies.

Do you recall seeing the Mel Gibson movie – “The Patriot?”

In the film, Gibson plays a farmer who eventually leads a militia of colonists against the british troops.

The main villain in the movie is named Tavington. Midway through the movie, Tavington kills Mel Gibson’s son and ruthlessly slaughters a number of innocent civilians…

“Col. William Tavington” is a fictional character, but he was based in part on real-life British commander Lt. Col. Banastre Tarleton. Tarleton served under Lord Cornwallis during the American War for Independence. Like the fictitious Tavington, Tarleton adhered to the concept of “total war” (civilians who helped the enemy were the enemy), though he is not accused of engaging in the specific atrocities that Tavington does in the movie.

Still, in a 1952 biography, Tarleton was noted as having been nicknamed “Bloody Ban” and “The Butcher.” Hut his time in the military was actually something to be proud of.

Banastre Tarleton’s father died when he was 19, leaving the young man a fortune of 5000 pounds. This was a mistake, for in less than a year Banastre burned through the money and ran himself into debt by gambling it away. The military offered a way out for young men in similar straits, and in April of 1775 he convinced his mother to buy a commission for him as part of in the King’s cavalry. This proved to be a fortunate choice, for he took to cavalry life like a fish to water.

Early in 1776 he volunteered for service in America, crossing the Atlantic in time to participate in the unsuccessful first siege of Charleston. By the fall of ’76 he was fighting in New York, attracting the attention of superiors by his daring and success. After he helped capture the American General Charles Lee, considered a great coup for the British, Tarleton was promoted to Captain. Before the year was out he was promoted again to Lieutenant Colonel and placed in charge of the newly-formed British Legion, a mixed company of cavalry and light infantry.

His rise was spectacular in the stodgy, tradition-bound British army; without money or family connections he had worked his way to an independent command before the age of 24.

Tarleton’s legion once engaged a Virginia unit under Colonel Abraham Buford, leading to what has become known as the Waxhaws massacre, on May 29, 1780. This incident, accounts of which are confused and contradictory, cemented Tarleton’s reputation with the Americans thereafter as a ruthless leader. Some argue that Buford was given the opportunity to surrender and refused it, while others claim that Buford had surrendered and Tarleton ruthlessly ordered his men to massacre the Americans.

Patriots claimed that because Lt. Colonel Tarleton did not want to be slowed down by prisoners, he ordered that everyone be killed. Tarleton himself claimed no responsibility, sayng his men merely reacted out of anger when they thought he had been shot and killed after a flag of truce had been raised.

Despite the American perception, at home he was a hero. On his return to London in January of 1782, he was the toast of the city and soon counted the young Prince of Wales among his friends. Tarleton was one of the few British officers to gain laurels in the American conflict. On February 2, a family friend wrote: “The famous Tarleton looks as young as when you knew him at Norwich. He is much en vogue. He is invited, known or unknown, to all the assemblies, and wherever he stands, a circle is formed around him.”

He also had his portrait painted by a couple of famous artists. The stance that Tarleton takes in the famous Reynolds portrait appears to be to hide the two fingers he lost in battle. But it was not to last; the Colonel squandered his brilliant reputation over the next several years through his compulsive gambling and in 1786 he was the subject of critical letters published in the London papers which excoriated his handling of another battle.

Through all of the criticism, Tarleton’s home town elected him to seven terms of Parliament, and he retained his officer’s commission even in times of severe financial stress, when the temptation to sell it must have been very great.

When Jason Isaacs, the actor who played Tarleton’s fictional character in the movie, was asked on a talk show how he could play such a ruthless and cruel character, his answer was interesting: He said – “I was the hero of another story.”

Have you ever been criticized by someone who didn’t fully understand or agree with your actions at the time, or someone that saw your team as the villain even though you were simply fulfilling your role as their competition? Teamwork and collaboration are about going all-in and filling the gaps to make your current team successful. You may not remain on the same team forever, but you owe your current organization complete commitment, without apology…

The truth is that you may be a villain in the eyes of some, but you are also the hero in someone else’s story. Great leaders and teammates know that it is their job to be the villain to some – because by choosing those whom you stand in opposition to, you define your position and principles and become heroic to the people that are following and working alongside you…

Whose story will you be a hero in?

If you are ready to lead your team with greater focus, improved morale, and better communication, consider a fun team building event or custom workshop with Sean!