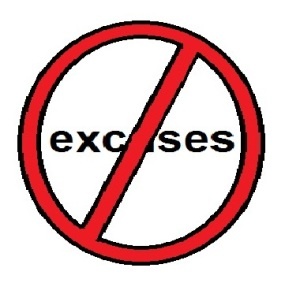 One of the most important skills to be a good teammate and improve mental toughness involves the decision to set high expectations and never make or accept excuses.

Winners are both intentional and accountable.

Whatever your goal and whoever is on your team, your success will be determined by how willing you are to say no when an excuse is offered.

To assist you with that, I have shared two lists below…

This first is a list of twenty people who did not find success until they were over thirty years old.  Age is much less of an obstacle to success than apathy and excuses, but all-too often people quietly tell themselves that it is too late to do what they feel they were meant to.

Remember that it is never too late to start something amazing – and you are in pretty impressive company if you are yet to begin your life’s greatest work.

Take a look at this collection of people who accomplished great things at different ages:

1) J.K.Rowling was 30 years old when she finished the first manuscript for Harry Potter

3) Oprah was 32 when she started her talk show, the highest-rated program of its kind

5) Martin Luther King, Jr. was 34 when he delivered his speech, “I have a dream”

11) Christopher Columbus was 41 when he discovered the Americas

13) Suzanne Collins was 46 when she wrote “The Hunger Games”

16) Abraham Lincoln was 52 when he became president

Obviously, you are never too old to go after (or to help others go after and achieve) a worthwhile goal that you desire. And while the list above only provides examples fo people who refused to accept “too old” as an excuse, there are certainly other lists that could be made to remove other limiting perceptions.

A good teammate will not blieve or allow others to feel that they are too young, too short, too tall, too thin, too fat, or too (anything else) to be successful if they are truly determined.

The second list is a collection of quotes to help you emphasize, both to yourself and to those your team, the dangerous negative power of excuses.

When you feel the urge to make an excuse, revisit this list and re-commit yourself to being accountable, dependable, and determined to succeed:

6.         We have more ability than will power, and it is often an excuse to ourselves that we imagine that things are impossible.

5.         Excuses are tools of the incompetent.  Those who are good for making excuses are seldom good for anything else.

4.         People with integrity do what they say they are going to do. Others have excuses.

3.         Ninety-nine percent of failures come from people who have the habit of making excuses.

1.         Like a mass of locusts over Egypt, so the swarm of excuses is a general plaque, a ruinous infection among men, that eats off the sprouts of the Eternal.

As you and your team move together into the New Year, make a pact to accept no excuses.

What Hannibal so famously said, when people insisted it would be impossible to cross the Alps on elephants, is what you should say to yourself and your teammates:

“We will either find a way or make one.”

If your organization could use a boost of morale and leadership skills, consider a team development event for your next training day.  An engaging and interactive day of laughter and team building lessons can have a tremendous impact on your team’s focus and energy!