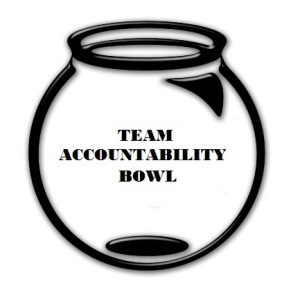 If you would like to improve your team accountability, starting a fun “consequence bowl” tradition may be exactly what your people need.

It should not only be the responsibility of the team leader to hold others on the team accountable.

All team members or staff should actively claim ownership for their own behaviors and for holding each other accountable.  This will lead to better team communication, increased productivity, and improved cohesiveness.  To create a stronger culture, you may consider adding this idea to your staff meetings as a tradition…

What is “The Consequence Bowl” and how does it work?

Bring a bowl to your next staff meeting, and give every team member three note cards. On each note card, they will then write their name and something they want (provide a ceiling of $5-$10, your choice…) or a favor they would like done for

them that would take less than a half-hour to complete.   Allow only one request on each note card, and remind your team that the requests should all be “in good taste” (no humiliating or inappropriate demands). Examples might include anything from delivering a Starbucks coffee, a fast food meal, or bringing donuts – to running an errand of some kind. The note cards should then be folded and placed in the bowl.

Explain that the bowl will be brought to every staff meeting.

If a team member neglects a particular job task or fails to keep a promise related to work, they will be required to pick one of the slips of paper from the bowl and deliver the item or service to the person chosen.  Examples of reasons to “pick a card” from the bowl could include being late for a meeting, not replying in a timely manner to an important message, or failing to meet a deadline of some kind.

The team member, after picking a card from the bowl, will then read aloud what was written on the slip of paper and perform the task or make the purchase within the next two days. If they failed to do so, they would then have to pick from the accountability consequence bowl once again at the next meeting, and would still be responsible for fulfilling the previous bowl pick as well…

Any team member’s failure to meet the expectations of their role affects the entire team.  The team member who is required to “pick a card” is, in a sense, making it up to the whole team. All team members therefore have an equal chance of getting their card picked.  This is a great activity for all team personality types!

1. Staffers and team members should NOT be permitted to write down any of their job responsibilities on the note cards in the bowl; they still will need to perform their own assigned responsibilities.

2. The team leader should also fill out and include their own note cards, and are subject to being held accountable for their behaviors by team members as well.

3. The bowl is not a substitute for team disciplinary actions, and should be conducted with a spirit of fun.  Any consistently detrimental behavior should be addressed another way.

4. The team should identify representative examples of behaviors that would require them to “pick a card” from the bowl, and not use it to punish every little mistake of team members.

5. You should take into consideration the finances of your team members to ensure that the purchases requested never become a hardship.  A secret ballot could be used to determine limits, but in most cases $5 is a good idea and offers both a fun treat and a memorable consequence for teammates.

The Team Accountability Bowl can become a positive and fun tradition…

Eventually, it is likely you will have team members owning up to their own mistakes during meetings (without prompting) and requesting a turn to pick a card from the bowl.

Additionally, some staff members who normally wouldn’t interact with others socially will see this as an opportunity to build relationships and share a laugh or two over the cup of coffee, meal, or service that was initiated by their bowl pick.

Ideally, many weeks will go by with no one having to pick from the bowl…  but if you have a few nagging behaviors that need to be addressed, this can be an enjoyable way to do so!

Obviously, if you are dealing with more serious issues that are negatively affecting team performance – or if you would just like to provide your team with a morale-boosting Atlanta team building event or team building speaker, Sean can help you transform your group into a more productive team.