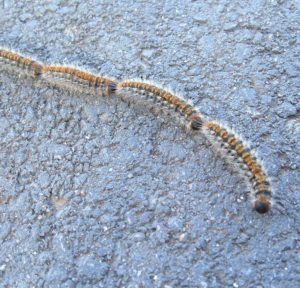 You are already familiar with the story of transformational adversity – caterpillars will turn, after hibernating in a cocoon and struggling to escape, into a beautiful butterfly…

But there is another kind of caterpillar story that shares a lesson on team leadership and offers a warning to organizations and teams who become too comfortable or predictable.

There is a species of caterpillar called a processionary caterpillar.

It has been so named because once the group leader establishes a direction, all the others will fall in very closely behind and move dutifully in the same established path.

As a matter of fact, the followers’ behaviors become so automatic that their eyes become half-closed as they shut out the world around them and simply allow the leader do all the thinking and decision making about which direction to pursue.

Their behavior is rote and automatic and mindless.

An experiment by French naturalist Jean-Henri Fabre demonstrated the surprising strictness of the processionary caterpillars’ behavior when, on one occasion, he enticed the leader to start circling the edge of a large flower pot.

The other caterpillars followed suit, and quickly formed themselves into a closed circle of caterpillars, where the distinctions between leader and follower became totally blurred, and the path had no beginning and no ending.

Instead of getting bored with or even acknowledging the nonproductive activity, the caterpillars kept up their activity, without any adjustments, for several days and nights until they dropped off the edge of the flowerpot from exhaustion and starvation.

Relying totally on instinct, past experience, custom, and tradition, the caterpillars achieve nothing because they mistook activity for achievement.

HOW IS A CATERPILLAR RELEVANT TO YOUR TEAM LEADERSHIP?

I believe employees can fall into the trap of following their leader out of blind or thoughtless loyalty, also- but it is not only the leader who should be held accountable for this “circling the flower pot.”

Innovation, risk taking, and strategic creativity are all lost when employees act like drones rather than as individual leaders of themselves and an example of initiative to others.

While your team performance may not suffer immediately if an individual contributor’s behaviors are automatic and without innovation, the business may have enjoyed an unexpected and dramatic improvement if they had been encouraged to keep their “eyes wide open” and share their ideas to more effectively move toward a stated goal…

Are there any obvious examples of “circling the flowerpot” that you are familiar with in your organization?  If so, the surest way to combat it is to open up lines of communication where people are encouraged to keep their eyes open and collaborate.

Teammates are people who choose to be a small, valuable and contributing part of something greater than themselves.

If you want people to follow thoughtlessly and only do monotonous work, your organization’s morale and performance will soon begin to nosedive.

Engagement is the result of connecting people to each other and to a compelling common goal.

You can accomplish both of those with a high-energy and interactive business or teacher team building event.  Rather than allowing (or even unintentionally encouraging) your people to accept the status quo and just go along with the program, strong leaders find ways to include people and inspire them to collaborate and share ideas.

Your greatest competitive advantage is found in asking your people to be alert for opportunities to improve themselves and the systems they are a part of.

One thought on “Team Leadership and Another Kind of Caterpillar Story”