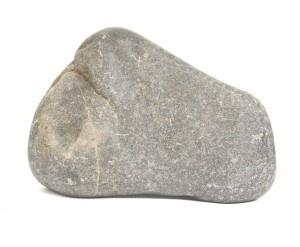 Once upon a time, somewhere in Eastern Europe, there was a great famine.

People in one small village jealously hoarded whatever food they could find, hiding it even from their friends and neighbors.

One day a wanderer came into the village and asked an old woman a few questions about the village as if he planned to stay for a few nights.

“There’s not an extra bite to eat in the whole province,” she told him. “People have very little and keep to themselves around here.  Better keep moving on.”

But his reply surprised the old woman.

“Oh, I have everything I need,” he said. “In fact, I was thinking of making some stone soup to share with all of you.”

He pulled a large cauldron from the back of his wagon, filled it with water, and built a fire under it there along the side of the road.

Then, with great ceremony, he opened an ornate wooden box, and withdrew a velvet bag.

When he opened the velvet bag, he took an ordinary-looking stone from inside the bag and dropped it into the water.

Some of the villagers stirred as they saw him preparing to cook and share a meal.

Soon, after hearing a rumor of food, most of the surrounding villagers had come to the square or begun watching from their windows. As the wanderer sniffed the stone soup “broth” and licked his lips in anticipation, hunger began to overcome their skepticism.

“Ahh,” the wanderer said to himself rather loudly, “I do like a tasty stone soup. Of course, stone soup with cabbage — that’s hard to beat.”

A few minutes later a villager approached hesitantly, holding a cabbage he’d retrieved from its hiding place, and added it to the pot.

“Excellent!” cried the wanderer. “You know, I once had stone soup with cabbage and a small bit of salted beef as well, and it was a meal fit for a king.”

The village butcher managed to find some salted beef… and the wanderer began to smile.

He commented on how good potatoes were when added to stone soup, and soon there was a villager who brought two nice potatoes to add to the cauldron.

It continued for nearly an hour, and soon the cauldron saw onions, carrots, mushrooms, and other items added as well, until there was indeed a delicious meal nearly overflowing within the cauldron he had placed above the fire.

The villagers all enjoyed a delicious meal together, laughing and talking among themselves.

Many could not remember the last time they had spent so much time with each other, and each of them thanked the wanderer for his gift of the magical stone that he had brought.

A few of the villagers offered the wanderer money for his magic stone when he took it from the cauldron and placed it back inside its velvet bag, but he refused to sell and explained that he would need to travel to another village the next day.

Before leaving, though, he told a young boy that there were many stones just like the one he had used along the river, just a short walk outside of their village.

And he told the boy that it was not the magical stone that made delicious soup, but instead was the many contributions of the people in the village that made the meal such a success.

The moral is that when we hoard our talents and training, we will all struggle and starve.

But – when we each contribute the gifts we have to offer, the result is much more impressive and enjoyable – whether it involves making soup or not.

If the villagers in YOUR organization are struggling to work well together, let me provide a cauldron of activities and insightful messages that will inspire them to come together.  Whether you are looking for team building for teachers or you want someone to deliver an interactive keynote and fun conference ideas, I am available to help you build a more cohesive team.