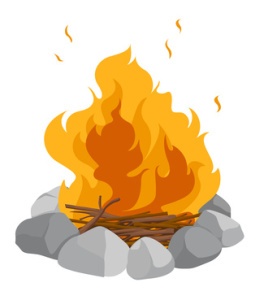 The fire pit in our backyard is perfect for keeping a small group warm, but it is only cozy when there are around half a dozen people.  Team size is important, because at some point your group growth may become too big for your campfire.

When the group numbers are small, it is far easier to maintain relationships and there is never a danger of someone not hearing the message of being on the same page because of a poor organizational communication structure.

A majority of people today would likely argue that “bigger is better,” but a sense of belonging and cohesiveness is vital to performing as a strong and successful team.

As long as the group is small, and can comfortably sit and share around that campfire of ideas and interactions, the group’s purpose and values will be clear and consistent.  But as an organization grows, the message can get diluted or distorted if the group is too large to stay connected – if they can’t all fit around the campfire.

Jeff Bezos, the founder of Amazon.com, had what he called a “two-pizza rule”: If a team could not be fed with two pizzas, he considered it too large.

He knew that small organizations, especially at the start, are much easier to manage and keep focused.  Everyone there would know the reason for coming together; everyone there is enthusiastic about the mission and excited to fulfill their role.

But as the group grows and new members join in – the original team campfire is seldom large enough to keep everyone inspired and connected to that same warmth.

Those on the perimeter cannot feel the heat as intensely as by those who are close to the original campfire.  People who feel distanced from the goal get more easily unfocused, more easily distracted, and can sometimes form their own cliques – drifting away from the cohesive core values or purpose that those close to the campfire want to maintain.

At those times – when the group has grown too large and those team members on the periphery are beginning to feel disconnected, neglected, or lost – it is vital that leadership reconnect them with the fire of purpose or connection that they lack.

People who used to be “united” together may experience discouragement when they see their organization has grown but has become so large that there is difficulty in communicating and maintaining the same values and purpose that the first campfire group enjoyed.

So how do you and your organization deal with team growth and the danger of disconnectedness?

I think the first step is to be clear about what your team mission and vision are, and then find ways to tell that story and repeat it often in different ways to everyone in your organization.  Help everyone to see how their efforts and individual roles contribute to those values and goals.

In essence, it is one role of leaders in larger organizations to provide torches taken from the original campfire and continue to share the flame so that the peripheral teams can still feel a cohesive part of the whole.

But the obvious question this issue raises, concerning the ideal team size, is an issue that even researchers cannot agree on completely.

The Army sends out Special Forces patrols of four to six people.

Harvard’s Richard Hackman and Neil Vidmar concluded that the optimal size for a project team is five (they actually said 4.6, but I don’t think it’s possible to be .6 of a person).

Other recent research findings have suggested that a high performing team should have somewhere between four and twelve members, as you must be sure to keep the team small enough that people are able to build quality relationships, are held accountable for their contributions, and are easily made aware of their colleagues activities and progress.

Commit to building a stronger network of torches to remind those who are now simply “silos” of the goals and culture that they have forgotten.

Take a lesson from the NFL, who has position coaches that work with between four and seven athletes, depending upon whether they are offensive line, running backs, linebackers, etc.  But they ALL come together to establish the sense of unified purpose and cohesiveness that great teams display.

Few leaders can effectively coach, mentor or manage more than five or six people and their productivity in a day to day setting.  And small teams are more agile, more transparent, more aware of each other’s strengths or needs, more accountable, and far more likely to come to quick decisions

But team development requires those small teams to stay connected to the campfire.

If you are in a large organization with project teams suffering through low morale or poor communication habits and feeling disconnected, it is vital that you find a way to spread that metaphorical fire of values, purpose, and unity to your people.

How much more productive, positive, and purposeful would YOUR organization be if they felt more connected to others and to organizational goals?

Find a way to share the original campfire with your people on the periphery and allow those in the heart of the organization to ignite others by making connections and carrying torches to the silos that need to be unified.

Contact Sean if you would like to know more about what an event that can accomplish those goals might look like, or if you are seeking a team building speaker to inspire that sense of cohesiveness that great teams possess.